To breed parrots in captivity is quite popular and the Agapornis canus were the first reported to breed in captivity in 1860 in the Zoological Garden of London. The Imperialism leads to the African continent conquest and with it were caught the first African parakeets with a sweet behavior: they were always in pairs. They did it very well in captivity and today there are hundreds of thousands in captivity. They received the name Lovebird due to its peculiar behavior. Thousands were exported to Europe

Its unique behavior of always being paired gave them the name LOVEBIRD and its equivalent meaning words in all languages.

They were first imported in Brazil by 1950 from Africa. Thousands arrived at Santos Harbor during the next decades. They were known as “African little parrots”. By 1980 they were already known as Agapornis, the genus’ Latin name.

The lovebird breeding reached the top about 1985 with a sort of new mutations being discovered and maintained. The breeders started thinking in pigments and feather’s structures. Many authors appeared. It is famous Hayward’s book in 1979, the very first to speak about lovebirds exclusively. 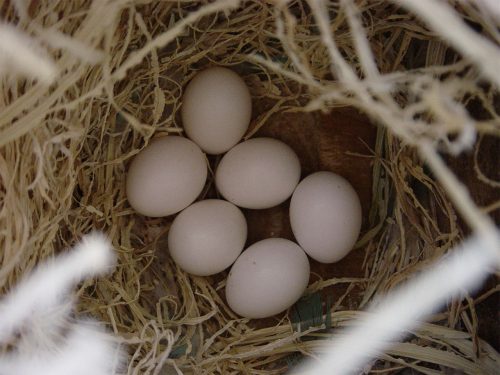 The Agapornism is set as a proper fancy and have enchanted hundred thousands of people around the world.

You certainly know the only species which have been not adapted so far is swindernianus, all the rest except pullarius have done quite well in captivity.

Why Roseicollis are the Commonest 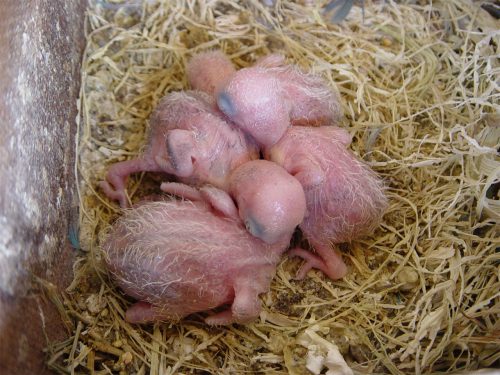 The other side, we have the eye-ringed lovebirds:

IMPORTANT: We do not want to discourage people from breeding others but roseicollis, we just want to call attention about the Agapornis breeding peculiarities. Just be attempt to it and you will not have any problems. We advise to start breeding with roseicollis, and later after some experience, with the other species.

Captivity breeding occurs year around during all seasons, there may be just an interruption during the molt that will take place at the end of summer and the beginning of the autumn. It is 5 clutches yearly at average.

Breeders warn to permit only three clutches per year in order to avoid overcharge of the females. This “overcharge” may occur mainly with birds kept in poor conditions of feeding and health. Too young birds shall not be permitted to breed.

We advice to give a break each two years at least, this way you will avoid bird lost and will provide you good breeders for years (D’Angieri,A- The colored Atlas of lovebirds- TFH-1997).

The Best Way To Breed

A bird colony has facilities to the bird breeder. A single aviary can maintain several birds avoiding too much work for maintenance:

You feed all birds at once that mean the work is equal for one or ten couples. The bird colonies are always very beautiful and of amazing effect.

However we can recognize several disadvantages:

Certainly to keep birds in single cages provide much more work than colony breeding. To keep ten pairs you will have ten times more work. (D’Angieri- The colored Atlas of lovebirds- TFH-1997)

However we have some vantages:

The lovebirds will not require much food either in good climate conditions, natural or in heated bird rooms. If they are let outside, manly in temperate climates they will require extra nutrients and food.

Good food, mainly in reproductive season that may be run the entire year, shall be provided abundantly. The minimal food requirements for reproduction are: 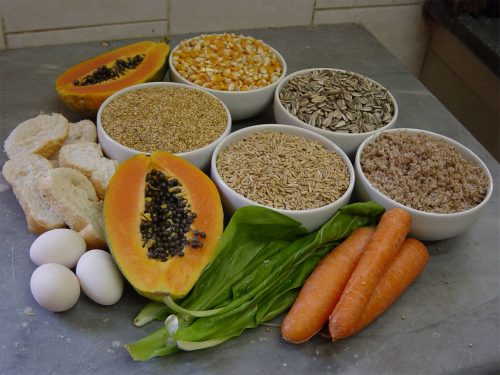 Lovebirds are good eaters and will accept a great sort of foods. A source of vegetables, seeds and fruits should be offered:

Many breeders suggest the use of balanced flours, it is a mix of different “flours” that are offered generally wet to the birds. The main ingredients are: sugar, powder milk, powder eggs, honey and olive oil

Just mix them all to get homogeneous flour, wet and flavorful. Put in small amounts to be eaten fast. The “flour” is very perishable so any amount that is not promptly eaten must be removed soon. Prepare it daily. Avoid keeping it even refrigerated. 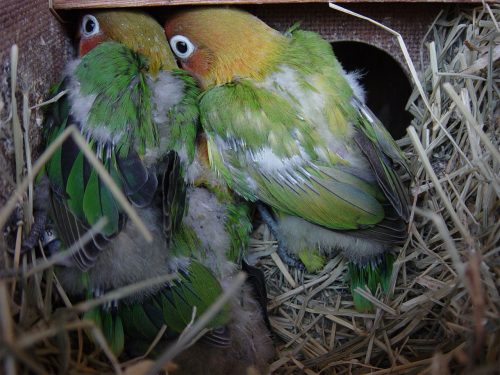 N.B.: Ravazzi (Agapornis-FOI-2003) suggests a continuous varied menu each day of the week. It is certainly the ideal but not always possible.

Industrialized pellet or extruded pellets are often available in the market. Our experience shows better results with domestic flours and food.

The most varied kinds of housing can be offered and it will depend on what you want: breeding or just ornamental purposes. In this case cages are more than enough and are available in a great sort of sizes and models.

Aviaries can be made of iron or wood with a wire netting front (1/2 or ¾ inches mesh).Small mesh-size is very important to prevent rodent attacks. (It is recommended a minimum area of 30 cubic feet for each pair, either single or in colonies (D’Angieri,A- The colored Atlas of lovebirds- TFH-1997). 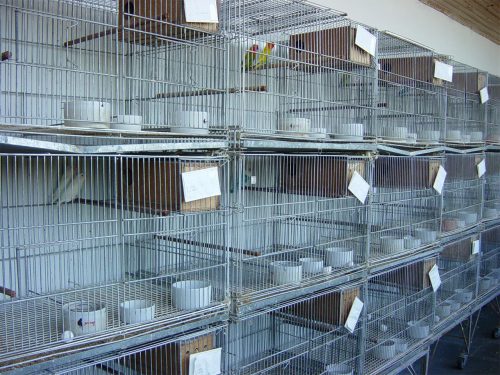 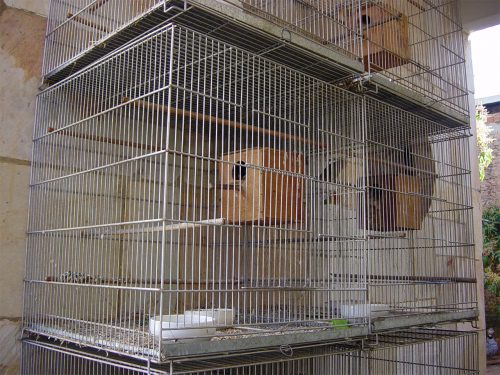 Regarding nesting materials and nest-box models, the practices of breeders vary tremendously.

We must keep in mind that the nest-building lovebirds vary the amount of filling they use according to the size of the cavity. The bigger the space the more time the lovebirds will take to fill it before they can lay eggs.

The author’s experience has been very successful and we believe that the models described will bring you the same success. Nest boxes must be built of wood. We suggest wood 8 mm thick. It can be painted, but you should avoid light, clear color tones; dark brown, gray or plum is advisable. The measurements are 80 x 65 x 65 inches, with an entrance hole about 22 inches in diameter (18 inches for nigrigenis, lilianae and canus). A small perch below the entrance (about 4 inches long) is advisable. The nests for pullarius must be filled with solid cork; some European aviculturists use turf instead of cork, and clay can also be used with success.

The nesting material used by these little feathered engineers is in general straw or flexible twigs. Several kinds of straw can be used successfully since they provide enough strength to support the nest structure, yet do not present the danger of accidents such as hanging, etc. We suggest yellow broom straw. Some breeders use dry palm leaves or weeping-willow twigs. 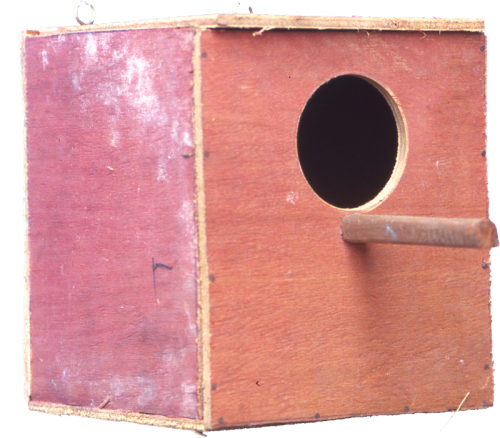 Advices to Mate a Lovebird 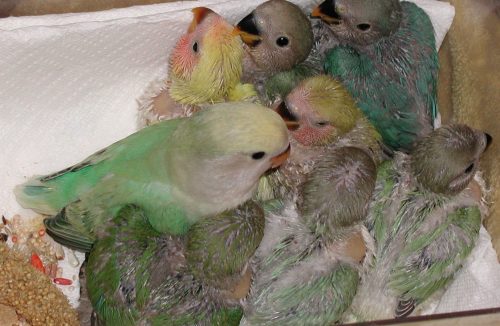 As a well-camouflaged bird is less likely to catch the eye of a predator than one which bears some startling colors, it stands more chance of living to breed youngsters with similar unobtrusive colors. Although its cries may give a direction in which to look, it is almost impossible to discern a green lovebird sitting still among the foliage of a tree. When it moves it is seen and when it stops, in a twinkling it is lost again. Therefore, there has to be some strong advantage for a male lovebird to risk its life by assuming a plumage which is different from the cryptic one of the female. Nevertheless, the parrot breeder usually assumes that there must be some physical difference between the sexes, yet it cannot always be so. There should never be any difficulty in sexing adult canus, pullarius and taranta, for they are strongly sexually dimorphic. The immatures can be sexed because the black under-wing coverts are exclusive to the males.

However roseicollis and the white-eyed lovebirds are entirely different. The size of the head and the width of pelvic bones are believed by many to have their uses, and they may, but the evidence is against them being always correct and the interpretation is very subjective. For that all, sexing should be straightforward enough if attention is given to behavior. If adult lovebirds are divided into pairs and a nest-box and nest material is given then, hens will carry nest material into the box. If the birds are two males this is unlikely, for even though some few males will carry nesting material they seldom, if ever, take it into the nest-box. Male pairs will often copulate with each other but this is less common with two hens. And two hens lay over 9 or 10 eggs in the nest.

How to sex a lovebird

To determine the lovebird sex is certainly one of the major problems to the beginners in the fancy. Today, the DNA sexing by PCR techniques is available easily and almost costless, but we would like to set four main methods of sexing:

The position of the tail feathers: One guide to sex lovebirds is the manner in which they hold their tail-feathers. The female lovebird tends to advertise her sexual dominance by keeping her tail slightly flared, whereas the males signal their submissive state, relative to that of their mates, by holding theirs more tightly nipped. It is a constant facet of lovebird behavior. Yet it cannot be used as a perfect method.

The pelvic-bone test: We know that for comparative equal body-sizes, females tend to have wider hips than males. The greatest effect of estrogen when approaching and during the egg-laying period makes it technique easier at this time: By holding a bird using the tip of the finger to gently palpate the lower abdomen the two free ends of the pubic bones. It is a comparative technique, the space between the pelvic bones is larger in the females and it is said it should permit to sex accurately the lovebirds. This test is certainly too subjective although it has been described in books dating from the late 1890s.Scientific methods to measure its accuracy showed us this test is effective only for sexually active females.

Laparoscopy: A small surgical incision made into the left flank of an anaesthetized bird, is viewed from an endoscope. This will show the ovary or the testes and therefore its sex. There is always the anesthetic risk.

DNA analyses by PCR techniques: it is the third most utilized method in lovebirds, mainly in South America; the two first are observation of behavior and pelvic-bone test. We personally just use it with those rare and important lovebirds that remained “doubtful”, with no defined sex behavior or hips. Imagine the costs for a big breeder to DNA test hundreds of birds. Anyway it can be done with a single drop of blood or feather. It is 99, 99% of accuracy. 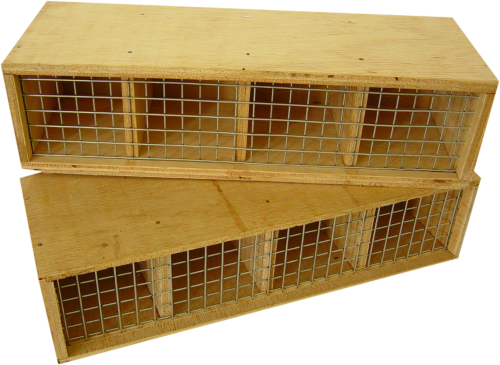 AFRICA, THE MOTHER NATURE of Agapornis

In a general analysis Agapornis are small, seed-eating African parrots weighing from 40 to no more than 60 grams and the nine cited species inhabit African continent.

Last century we had the opportunity to make a forty-five days trip Africa, as vacations, and try to see some of these beloved little parrots in their habitat. They were extremely shy and very difficult to observe between the foliages in the tops of Acacias, Baobabs, Marulas and other trees. But we have met a few flocks of lilianae and fischeri. We were there but, as a good amateur photographer, we were in the right time, right place but with the wrong camera lenses. Our objectives were not able to shoot those little parrots in the top of the trees. Just to illustrate let us share some habitat shots to have a better idea of the magnificence of the African continent, land of all lovebirds. These are just romantic pictures of a lovebird lover without any intention to write correct botanical data. 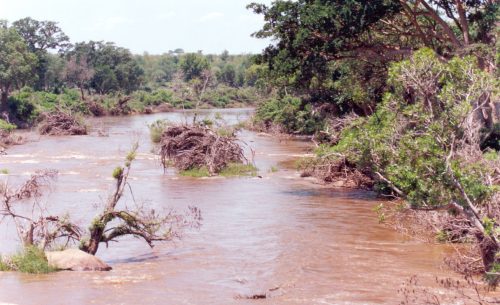